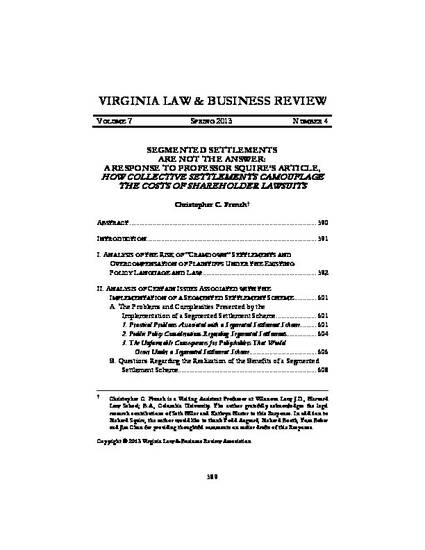 In his recent article, Professor Richard Squire offers a provocative theory in which he claims the underlying claimants in shareholder litigation against corporate policyholders are overcompensated due to what he describes as “cramdown” settlements, under which insurers are forced to settle due to the “duty to contribute” that arises under multi-layered directors and officers (“D&O”) insurance programs. He also offers a novel idea regarding how this problem could be fixed by what he refers to as “segmented” settlements in which each insurer and the policyholder would be allowed to settle separately and consider only its own interests in doing so.

In this Response to that article, I further explore the assumptions underlying Professor Squire’s claims. I also explore the complexities associated with implementing a segmented settlement scheme because such a scheme is not consistent with the existing policy language or common law that has developed. Under the existing policy language, insurers are only contractually obligated to contribute to settlements that are reasonable based upon the policyholder’s expected liability at trial. Consequently, the policy language regarding settlements would need to be rewritten to allow insurers to consider only their own financial interests when deciding whether to settle. In addition, in order to implement a segmented settlement scheme, the exhaustion requirement that currently exists in many excess policies would need to be removed to allow insurers to settle for less than their full policy limits. Such changes would have a dramatic impact on the structure of insurance programs and the risk transferring function of insurance because excess insurers’ exposure would increase while policyholders may be forced to become self-insured and fund significant portions of settlements. Such changes would also create some practical difficulties regarding the trials of cases in which the policyholder settled but some of the insurers had not because such cases would proceed without a defendant, the policyholder. The Response closes by addressing the issue of whether segmented settlements would be appropriate for other lines of corporate insurance.