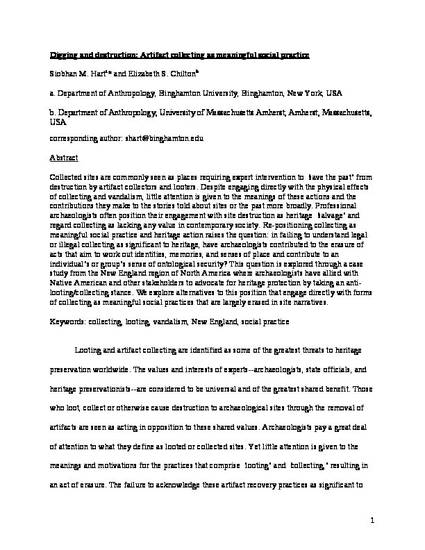 Article
Digging and Destruction: Artifact Collecting as Meaningful Social Practice
International Journal of Heritage Studies
Download Find in your library
Publication Date
Abstract
Collected sites are commonly seen as places requiring expert intervention to ‘save the past’ from destruction by artifact collectors and looters. Despite engaging directly with the physical effects of collecting and vandalism, little attention is given to the meanings of these actions and the contributions they make to the stories told about sites or the past more broadly. Professional archaeologists often position their engagement with site destruction as heritage ‘salvage’ and regard collecting as lacking any value in contemporary society. Repositioning collecting as meaningful social practice and heritage action raises the question: in failing to understand legal or illegal collecting as significant to heritage, have archaeologists contributed to the erasure of acts that aim to work out identities, memories and senses of place, and contribute to an individual’s or group’s sense of ontological security? This question is explored through a case study from the New England region of North America where archaeologists have allied with Native American and other stakeholders to advocate for heritage protection by taking an anti-looting/collecting stance. We explore alternatives to this position that engage directly with forms of collecting as meaningful social practices that are largely erased in site narratives.
Disciplines
DOI
http://dx.doi.org/10.1080/13527258.2014.934267
Comments