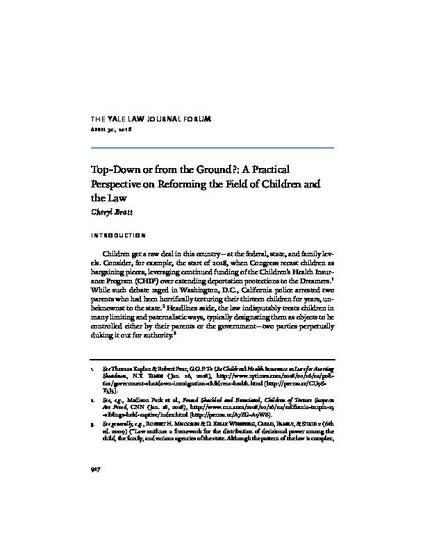 Article
Top-Down or from the Ground?: A Practical Perspective on Reforming the Field of Children and the Law
Yale Law Journal Forum
Download Find in your library
Document Type
Article
Publication Date
Disciplines
Abstract

Children get a raw deal in this country at the federal, state, and family levels. The law indisputably treats children in many limiting and paternalistic ways, typically designating them as objects to be controlled either by their parents or the government—two parties perpetually duking it out for authority. In their article, The New Law of the Child, 127 Yale L. J. 1448 (2018), Anne C. Dailey and Laura A. Rosenbury envision overhauling constitutional law to better promote children’s broader interests. Theirs is thus a top-down approach to change: by extending the Constitution to safeguard more robust rights for children, they hope that our communities will also come to embrace and respect children as full persons.

Their proposal is fresh and innovative, making a real contribution to scholarly conversations about children and the law. However, because their framework demands broad constitutional reform, actual implementation of their new paradigm is ultimately quixotic. Further, even if it were adopted, it would likely disappoint in practice. This Response submits that, rather than force change through a constitutional hammer as Dailey and Rosenbury propose, a more practical and effective path forward is through a youth-led approach. Youth-driven efforts within our current framework, rather than widespread constitutional reform directed by adults, are more likely to produce real changes to the ways in which society views, honors, and treats children. Such a method allows youth to self-select the issues and interests that matter to them, promotes their agency, and capitalizes on their effectiveness as change-agents specifically because of their youth.

Citation Information
Cheryl Bratt. "Top-Down or from the Ground?: A Practical Perspective on Reforming the Field of Children and the Law" Yale Law Journal Forum Vol. 127 (2018) p. 917 - 941
Available at: http://works.bepress.com/cheryl-bratt/6/