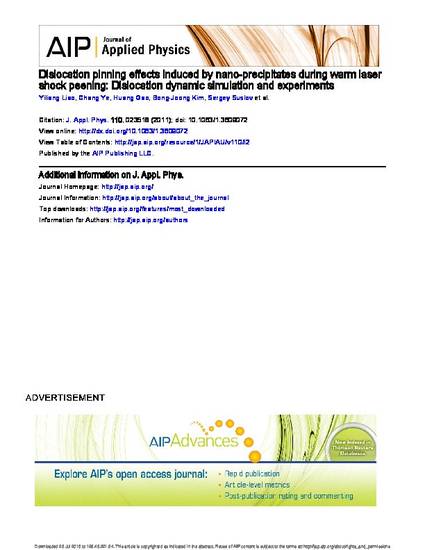 Article
Dislocation pinning effects induced by nano-precipitates during warm laser shock peening: Dislocation dynamic simulation and experiments
JOURNAL OF APPLIED PHYSICS
Download Find in your library
Abstract
Warm laser shock peening (WLSP) is a new high strain rate surface strengthening process that has been demonstrated to significantly improve the fatigue performance of metallic components. This improvement is mainly due to the interaction of dislocations with highly dense nanoscale precipitates, which are generated by dynamic precipitation during the WLSP process. In this paper, the dislocation pinning effects induced by the nanoscale precipitates during WLSP are systematically studied. Aluminum alloy 6061 and AISI 4140 steel are selected as the materials with which to conduct WLSP experiments. Multiscale discrete dislocation dynamics (MDDD) simulation is conducted in order to investigate the interaction of dislocations and precipitates during the shock wave propagation. The evolution of dislocation structures during the shock wave propagation is studied. The dislocation structures after WLSP are characterized via transmission electron microscopy and are compared with the results of the MDDD simulation. The results show that nano-precipitates facilitate the generation of highly dense and uniformly distributed dislocation structures. The dislocation pinning effect is strongly affected by the density, size, and space distribution of nano-precipitates. (C) 2011 American Institute of Physics. [doi:10.1063/1.3609072]
Comments

Copyright (2011) American Institute of Physics. This article may be downloaded for personal use only. Any other use requires prior permission of the author and the American Institute of Physics. The following article appeared in Journal of Applied Physics: Volume 110, Issue 2 and may be found at http://dx.doi.org/10.1063/1.3609072. The following article has been submitted to/accepted by Journal of Applied Physics. Copyright (2011) Yiliang Liao, Chang Ye, Huang Gao, Bong-Joong Kim, Sergey Suslov, Eric A. Stach, and Gary J. Cheng. This article is distributed under a Creative Commons Attribution 3.0 Unported License.