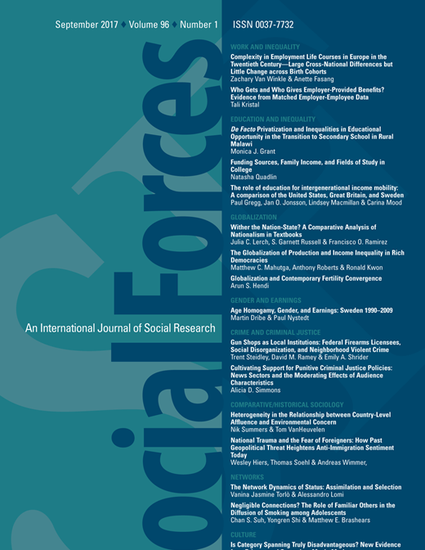 How is the delinquent behavior of adolescents influenced by their peers? Previous studies in criminology have primarily focused on the effects of friendship networks on delinquency, but what is less examined is the influence of weaker and often negligible relationships on behavior. In this paper, we explore the effect of familiar others, namely those socio-demographically similar peers who are not connected through friendships, on the behavioral diffusion of smoking among adolescents. Using data from the National Longitudinal Study of Adolescent to Adult Health, we show that, even after controlling for the behavior of friends, the smoking behavior of familiar others has a significant longitudinal effect on adolescents’ likelihood of smoking tobacco and marijuana. The results have important implications for expanding our understanding of the social diffusion of adolescent behavior through contextual mechanisms.

Citation Information
Chan S. Suh, Yongren Shi and Matthew E. Brashears. "Negligible Connections? The Role of Familiar Others in the Diffusion of Smoking Among Adolescents" Social Forces (2017)
Available at: http://works.bepress.com/chan-suh/5/