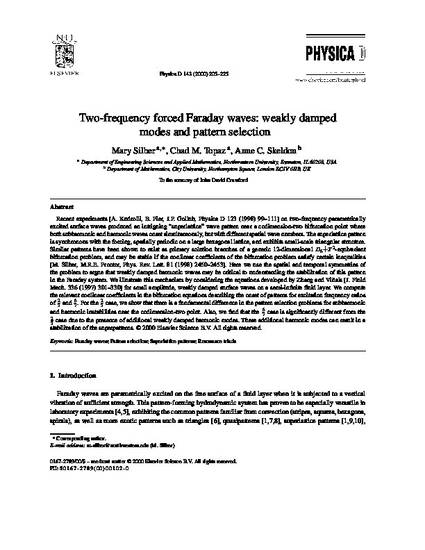 Recent experiments [A. Kudrolli, B. Pier, J.P. Gollub, Physica D 123 (1998) 99–111] on two-frequency parametrically excited surface waves produce an intriguing "superlattice" wave pattern near a codimension-two bifurcation point where both subharmonic and harmonic waves onset simultaneously, but with different spatial wavenumbers. The superlattice pattern is synchronous with the forcing, spatially periodic on a large hexagonal lattice, and exhibits small-scale triangular structure. Similar patterns have been shown to exist as primary solution branches of a generic 12-dimensional ${\rm D}_6\dot{+}{\rm T}^2$-equivariant bifurcation problem, and may be stable if the nonlinear coefficients of the bifurcation problem satisfy certain inequalities [M. Silber, M.R.E. Proctor, Phys. Rev. Lett. 81 (1998) 2450–2453]. Here we use the spatial and temporal symmetries of the problem to argue that weakly damped harmonic waves may be critical to understanding the stabilization of this pattern in the Faraday system. We illustrate this mechanism by considering the equations developed by Zhang and Vinals [J. Fluid Mech. 336 (1997) 301–330] for small amplitude, weakly damped surface waves on a semi-infinite fluid layer. We compute the relevant nonlinear coefficients in the bifurcation equations describing the onset of patterns for excitation frequency ratios of 2/3 and 6/7. For the 2/3 case, we show that there is a fundamental difference in the pattern selection problems for subharmonic and harmonic instabilities near the codimension-two point. Also, we find that the 6/7 case is significantly different from the 2/3 case due to the presence of additional weakly damped harmonic modes. These additional harmonic modes can result in a stabilization of the superpatterns.