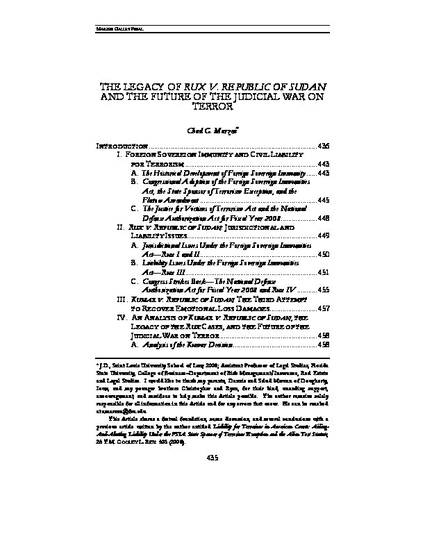 Article
The Legacy of Rux v. Republic of Sudan and the Future of the Judicial War on Terror
Cardozo Public Law, Policy and Ethics Journal (2012)
Download Find in your library
Abstract

The Republic of Sudan’s material support of terrorism has contributed to the loss of innocent American lives. In 2007, a group of more than 50 surviving family members of 17 United States sailors killed in the October 12, 2000 U.S.S. Cole bombing obtained a $7,956,344 judgment against the Republic of Sudan for its material support of Al-Qaeda that enabled Al-Qaeda to carry out the attack. The award included damages for the sailors’ lost wages and earning potential pursuant to the Death on the High Seas Act, but not for emotional loss. The United States Congress responded by enacting the Justice for Victims of State Sponsored Terrorism Act in 2008 within the National Defense Authorization Act, which allowed the recovery of damages for emotional loss under 28 U.S.C. § 1605A of the Foreign Sovereign Immunities Act. Despite congressional action, the family members of the deceased sailors still have not recovered damages for emotional loss because of the bombing. Most recently, in September 2011, all but four family members were denied recovery of emotional loss by the United States District Court for the Eastern District of Virginia in the Kumar v. Republic of Sudan decision on the grounds that their claims were barred by res judicata and barred because a contrary decision would violate the doctrine of separation of powers. The pursuit of damages for emotional loss continues, as the decision is currently on appeal with the Fourth Circuit Court of Appeals. This article argues that Kumar was incorrectly decided and, that in the wake of the progression of the Rux line of cases, the Fourth Circuit Court of Appeals is in a current position to uphold the clear intent of Congress to allow recovery of damages for emotional loss. To do so best upholds the clear intention of Congress to provide relief for the family members of victims of terrorism and the policies and purposes of 28 U.S.C. § 1605A. Overall, the Rux line of cases provides a particularly instructive, yet tragic, story of the pursuit of civil damages for terrorism in American courts. This Article discusses the background, legal issues, and legacy of the Rux line of cases, the policies and purposes behind the state-sponsor of terrorism exception and the Foreign Sovereign Immunities Act, and the future of the judicial war on terror in the wake of the implementation of 28 U.S.C. § 1605A. Rather than being a hindrance to U.S. foreign policy interests, the story of the Rux line of cases and the Republic of Sudan anecdotally exemplifies that the state-sponsor of terrorism exception can actually promote U.S. foreign policy interests and serve as a strong tool in the war on terrorism. Since September 11, 2001, however, Sudan has actually become more of a silent counterterrorism partner whose very status as a state sponsor of terrorism may conceivably be removed in the future.