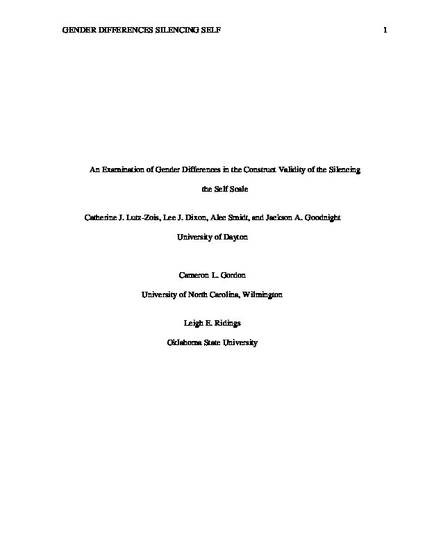 Jack’s (1991) theory of self-silencing was originally designed to explain higher rates of depression in women in comparison to men. However, research finding that men score equal or even higher than women on measures of self-silencing has led theorists to speculate that self-silencing tendencies may be driven by different motivations and have different consequences for women versus men (Jack & Ali, 2010). Using a sample of 247 college students, we examined gender differences in the construct validity of the Silencing the Self Scale (STSS; Jack & Dill, 1992). We hypothesized that women would score higher on the Externalized Self-Perception subscale, but not in the other three subscales. Gender differences in the relationship between the STSS subscales and theoretically relevant constructs were also explored. The results indicated that women on average scored higher than men on the Externalized Self-Perception subscale, whereas men scored higher on the Care as Self-Sacrifice subscale. Further, there was a significant Gender × Care as Self-Sacrifice subscale interaction in the prediction of depression, such that this subscale was negatively correlated to depression in men and uncorrelated in women. These results clarify how self-silencing might translate into different mental health outcomes for women and men.

Highlights: As hypothesized, women scored higher on the Externalized Self-Perception subscale of the STSS.

* We examined Gender × Subscale interactions in prediction of theoretically-relevant constructs.

NOTICE: this is the authors' version of a work that was accepted for publication in the journal Personality and Individual Differences. Changes resulting from the publishing process, such as editing, corrections, structural formatting, and other quality control mechanisms may not be reflected in this document.