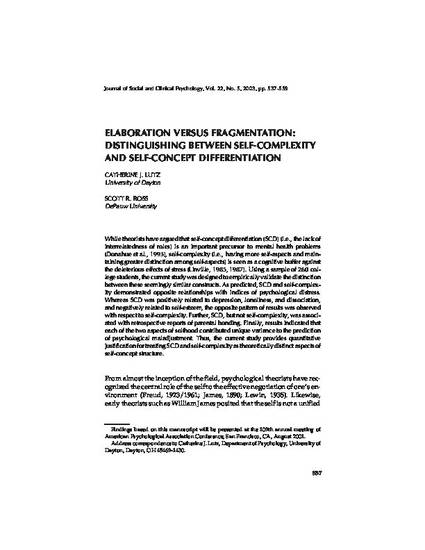 While theorists have argued that self-concept differentiation (SCD) (i.e., the lack of interrelatedness of roles) is an important precursor to mental health problems (Donahue et al., 1993), self-complexity (i.e., having more self-aspects and maintaining greater distinction among self-aspects) is seen as a cognitive buffer against the deleterious effects of stress (Linville, 1985, 1987). Using a sample of 260 college students, the current study was designed to empirically validate the distinction between these seemingly similar constructs. As predicted, SCD and self-complexity demonstrated opposite relationships with indices of psychological distress. Whereas SCD was positively related to depression, loneliness, and dissociation, and negatively related to self-esteem, the opposite pattern of results was observed with respect to self-complexity. Further, SCD, but not self-complexity, was associated with retrospective reports of parental bonding. Finally, results indicated that each of the two aspects of selfhood contributed unique variance to the prediction of psychological maladjustment. Thus, the current study provides quantitative justification for treating SCD and self-complexity as theoretically distinct aspects of self-concept structure.

All rights reserved under International Copyright Convention. No part of this text may be reproduced, transmitted, downloaded, or stored in or introduced into any information storage or retrieval system, in any form or by any means, whether electronic or mechanical, now known or hereinafter invented, without the written permission of The Guilford Press.

Article is included in repository with the permission of the publisher. Permission documentation is on file.