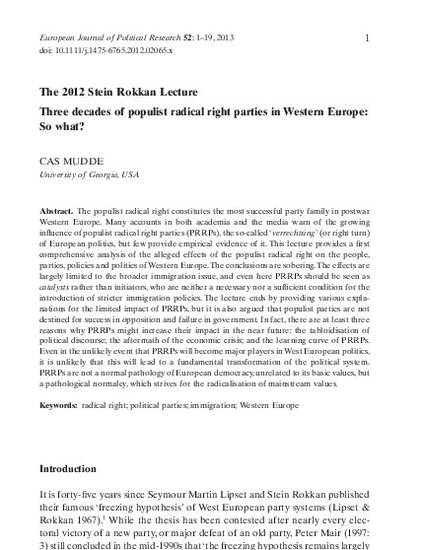 The populist radical right constitutes the most successful party family in postwar Western Europe. Many accounts in both academia and the media warn of the growing influence of populist radical right parties (PRRPs), the so-called ‘verrechtsing’ (or right turn) of European politics, but few provide empirical evidence of it. This lecture provides a first comprehensive analysis of the alleged effects of the populist radical right on the people, parties, policies and polities of Western Europe. The conclusions are sobering. The effects are largely limited to the broader immigration issue, and even here PRRPs should be seen as catalysts rather than initiators, who are neither a necessary nor a sufficient condition for the introduction of stricter immigration policies. The lecture ends by providing various explanations for the limited impact of PRRPs, but it is also argued that populist parties are not destined for success in opposition and failure in government. In fact, there are at least three reasons why PRRPs might increase their impact in the near future: the tabloidisation of political discourse; the aftermath of the economic crisis; and the learning curve of PRRPs. Even in the unlikely event that PRRPs will become major players in West European politics, it is unlikely that this will lead to a fundamental transformation of the political system. PRRPs are not a normal pathology of European democracy, unrelated to its basic values, but a pathological normalcy, which strives for the radicalisation of mainstream values.