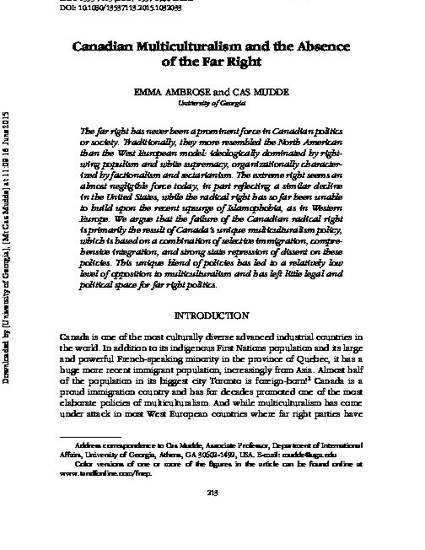 The far right has never been a prominent force in Canadian politics or society. Traditionally, they more resembled the North American than the West European model: ideologically dominated by right-wing populism and white supremacy, organizationally characterized by factionalism and sectarianism. The extreme right seems an almost negligible force today, in part reflecting a similar decline in the United States, while the radical right has so far been unable to build upon the recent upsurge of Islamophobia, as in Western Europe. We argue that the failure of the Canadian radical right is primarily the result of Canada's unique multiculturalism policy, which is based on a combination of selective immigration, comprehensive integration, and strong state repression of dissent on these policies. This unique blend of policies has led to a relatively low level of opposition to multiculturalism and has left little legal and political space for far right politics.