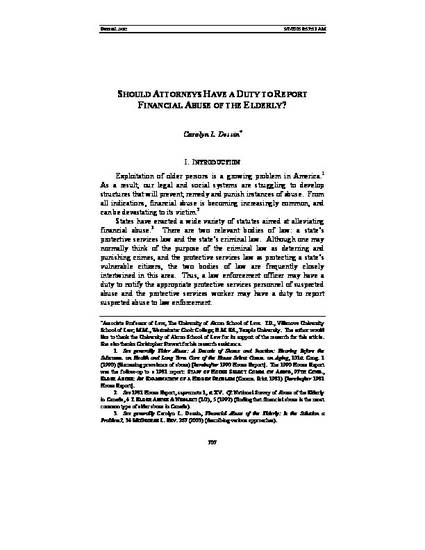 Article
Should Attorneys Have a Duty to Report Financial Abuse of the Elderly?
Akron Law Review (2005)
Download Find in your library
Abstract

Exploitation of older persons is a growing problem in America. As a result, our legal and social systems are struggling to develop structures that will prevent, remedy and punish instances of abuse. From all indications, financial abuse is becoming increasingly common, and can be devastating to its victim.

Each state has a mechanism for protecting vulnerable citizens. Thus, a state will have some agency charged with protecting the interests of those who need protection. Additionally, each state has a mechanism to allow a court of proper jurisdiction to appoint a guardian for the estate of a person who is adjudged incompetent. These protective arrangements intervene when a person is likely to be taken advantage of by others, but only after the protective services personnel learn of a potential problem.

With respect to criminalizing exploitation, states have taken a variety of approaches. Some states specifically criminalize financial abuse of the elderly. Others rely on criminal statutes of general application to proscribe exploitation. Still others use the age or vulnerability of the victim as a sentencing enhancement.

In addition to the statutes proscribing exploitation, many states have chosen to impose a duty to report suspected abuse. This is an attractive addition to the arsenal of weapons to combat exploitation. The rationale underlying these reporting statutes is simple: many more cases of abuse are likely to receive the attention they require from law enforcement and protective services agencies if we impose a duty to report suspected abuse to one or both of those agencies.

There has been some discussion about the effectiveness of mandatory reporting statutes. Some see them as an important tool in remedying elder abuse while others see them as relatively unimportant because failure to report is seldom prosecuted. Regardless of the actual efficacy of such statutes, they exist in many jurisdictions. This Article will therefore put the efficacy issue aside and focus on whether an attorney can and should report suspected abuse under a mandatory reporting statute.

Part Two of this article will examine the various states' approaches to mandatory reporting of abuse. Part Three will explore the various states' rules governing attorney conduct. Part Four will analyze the interaction of the mandatory reporting provisions with the rules governing attorney conduct. Finally, Part Five will discuss whether requiring attorneys to report suspected elder abuse is desirable.