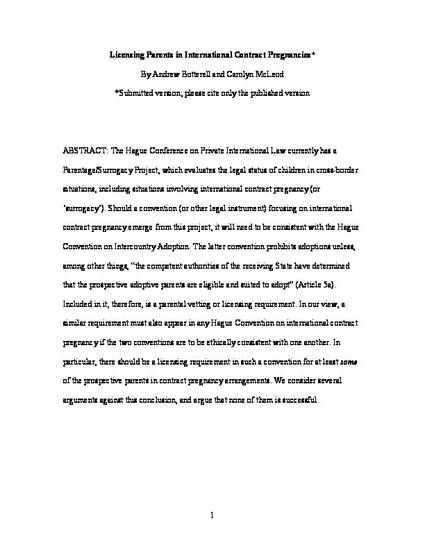 The Hague Conference on Private International Law currently has a Parentage/Surrogacy Project, which evaluates the legal status of children in cross‐border situations, including situations involving international contract pregnancy (or ‘surrogacy’). Should a convention (or other legal instrument) focusing on international contract pregnancy emerge from this project, it will need to be consistent with the Hague convention on Intercountry Adoption. The latter convention prohibits adoptions unless, among other things, ‘the competent authorities of the receiving State have determined that the prospective adoptive parents are eligible and suited to adopt’ (Article 5a). Included in it, therefore, is a parental vetting or licensing requirement. In our view, a similar requirement must also appear in any Hague Convention on international contract pregnancy if the two conventions are to be ethically consistent with one another. In particular, there should be a licensing requirement in such a convention for at least some of the prospective parents in contract pregnancy arrangements. We consider several arguments against this conclusion, and argue that none of them is successful.