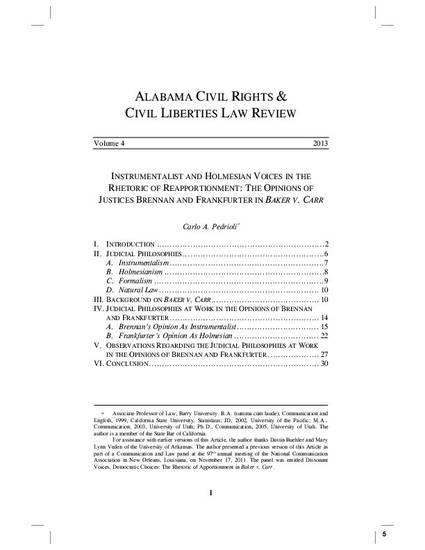 Article
Instrumentalist and Holmesian Voices in the Rhetoric of Reapportionment: The Opinions of Justices Brennan and Frankfurter in Baker v. Carr
Ala. C.R. & C.L. L. Rev. (2013)
Download Find in your library
Abstract

In his autobiography, Chief Justice Earl Warren described Baker v.Carr as “the most important case of [his] tenure on the Court.” Following Brown v. Board of Education by eight years, Baker was the second “blockbuster” case of the Warren Court. Warren felt that, if the progeny of Baker had preceded Brown, Brown would have been unnecessary.

As with other major Supreme Court cases, Baker featured rhetoric from highly influential justices, two of whom in this case were Justice William Brennan and Justice Felix Frankfurter. Justice Brennan would write the groundbreaking opinion for the Court that would be part of “the critical mass of the Brennan legacy.” Justice Frankfurter would write a scathing dissent that would defend the status quo staunchly. Although the case contained various opinions, the opinions of Brennan and Frankfurter were particularly important, especially because of how well they contrasted the respective judicial philosophies of their authors. Brennan’s instrumentalist philosophy in the majority opinion looked to use the federal courts to promote justice for urban voters, while Frankfurter’s Holmesian philosophy in a lengthy dissent aimed to pass the problem of fair representation along to Congress for resolution.