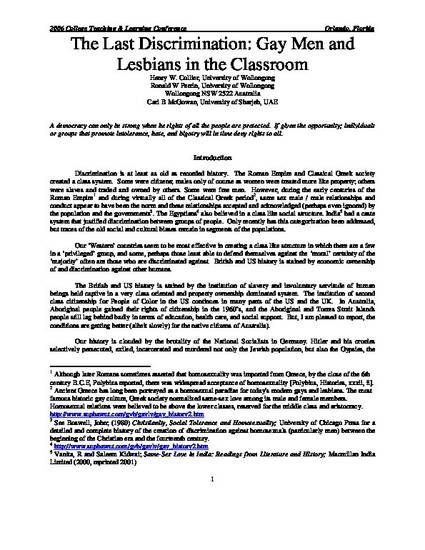 This article was originally published as Collier, H, Perrin, R and McGowan, CB, The last discrimination: Gay men and lesbians in the classroom, Proceedings of the 2006 College Teaching and Learning Conference, Florida, 2-6 January 2006.

Abstract
A democracy can only be strong when the rights of all the people are protected. If given the opportunity; individuals or groups that promote intolerance, hate, and bigotry will in time deny rights to all. Discrimination is at least as old as recorded history. The Roman Empire and Classical Greek society created a class system. Some were citizens; males only of course as women were treated more like property; others were slaves and traded and owned by others. Some were free men. However, during the early centuries of the Roman Empire and during virtually all of the Classical Greek period, same sex male / male relationships and conduct appear to have been the norm and these relationships accepted and acknowledged (perhaps even ignored) by the population and the governments. The Egyptians also believed in a class like social structure. India had a caste system that justified discrimination between groups of people. Only recently has this categorization been addressed, but traces of the old social and cultural biases remain in segments of the populations.
Disciplines
Citation Information
H. W. Collier, R. Perrin and C. B. McGowan. "The last discrimination: Gay men and lesbians in the classroom" (2006)
Available at: http://works.bepress.com/carl_b_mcgowan_jr/3/