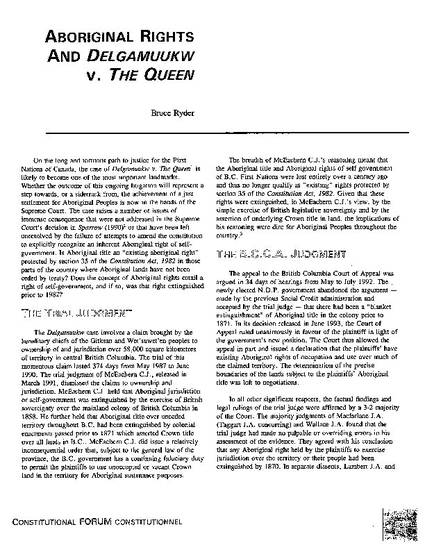 On the long and tortuous path to justice for the First Nations of Canada, the case of Delgamuukw v. The Queen' is likely to become one of the most important landmarks. Whether the outcome of this ongoing litigation will represent a step towards, or a sidetrack from, the achievement of a just settlement for Aboriginal Peoples is now in the hands of the Supreme Court. The case raises a number of issues of immense consequence that were not addressed in the Supreme Court's decision in Sparrow (1990) or that have been left unresolved by the failure of attempts to amend the constitution to explicitly recognize an inherent Aboriginal right of self-government. Is Aboriginal title an "existing aboriginal right" protected by section 35 of the Constitution Act, 1982 in those parts of the country where Aboriginal lands have not been ceded by treaty? Does the concept of Aboriginal rights entail a right of self-government, and if so, was that right extinguished prior to 1982?