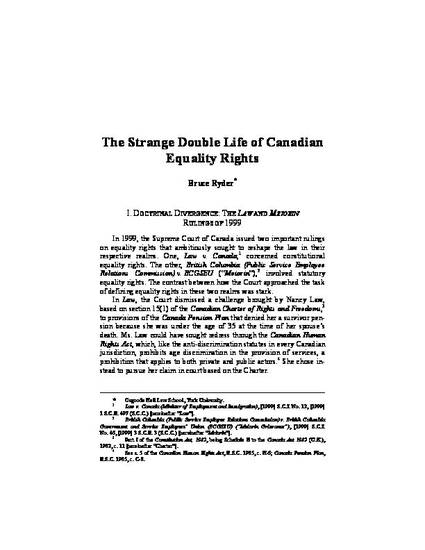 The paper examines the ways the tests for discrimination expounded in the statutory and constitutional contexts have coincided in Canadian law since Andrews v. Law Society of British Columbia. Based on statistical evidence that there are many more final rulings by human rights tribunals on statutory equality rights than rulings of Canadian courts on constitutional equality rights, the decisions of human rights tribunals interpreting statutory prohibitions on discrimination are exerting the primary influence on the development of anti-discrimination law as a whole. Since Law v. Canada (Minister of Employment and Immigration) and British Columbia (Public Service Employee Relations Commission) v. BCGSEU, three approaches have dominated debates on the approach to resolve this “strange double life” of Canadian equality rights. The paper concludes by illustrating how Moore v. British Columbia (Education) and Quebec (Attorney General) v. A. attempt to merge the tests for establishing discrimination in both the statutory and constitutional realms and bring us two steps closer to a more harmonized approach.