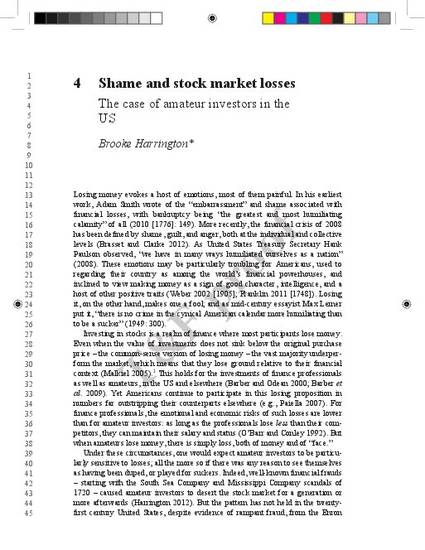 Contribution to Book
Shame and Stock Market Losses: The Case of Amateur Investors in the US.
New Perspectives on Emotions in Finance (2012)
Download
Abstract

Losing money evokes a host of emotions, most of them painful. In his earliest work, Adam Smith wrote of the “embarrassment” and shame associated with financial losses, with bankruptcy being “the greatest and most humiliating calamity” of all (2010 [1776]: 149). More recently, the financial crisis of 2008 has been defined by shame, guilt, and anger, both at the individual and collective levels (Brasset and Clarke 2012). As United States Treasury Secretary Hank Paulson observed, “we have in many ways humiliated ourselves as a nation” (2008). These emotions may be particularly troubling for Americans, used to regarding their country as among the world’s financial powerhouses, and inclined to view making money as a sign of good character, intelligence, and a host of other positive traits (Weber 2002 [1905]; Franklin 2011 [1748]). Losing it, on the other hand, makes one a fool; and as mid-century essayist Max Lerner put it, “there is no crime in the cynical American calendar more humiliating than to be a sucker” (1949: 300).