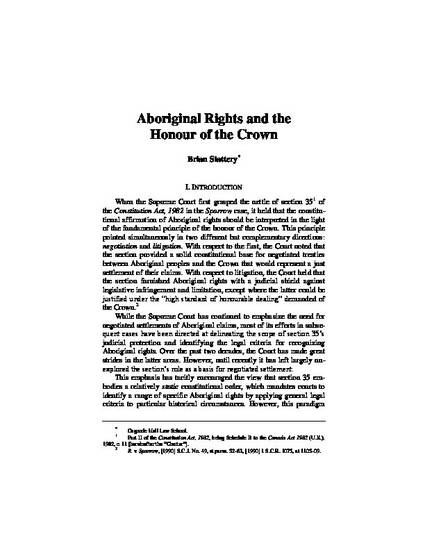 When the Supreme Court first grasped the nettle of section 35 in the Sparrow case, it held that the constitutional affirmation of Aboriginal rights should be interpreted in the light of the fundamental principle of the honour of the Crown. This principle pointed simultaneously in two different but complementary directions: negotiation and litigation. With respect to the first, the Court noted that the section provided a solid constitutional base for negotiated treaties between Aboriginal peoples and the Crown that would represent a just settlement of their claims. With respect to litigation, the Court held that the section furnished Aboriginal rights with a judicial shield against legislative infringement and limitation, except where the latter could be justified under the “high standard of honourable dealing” demanded of the Crown. In the Haida Nation and Taku River decisions, we witness the emergence of a new constitutional paradigm governing Aboriginal rights. This paradigm recognizes the potential of section 35 as a generative constitutional order — one that mandates the Crown to negotiate with Aboriginal peoples for the recognition of their rights in a contemporary form that balances their needs with the interests of the broader society. Professor Slattery asserts that according to Haida Nation, the section has a dual function. On the one hand, it serves as a basis for the judicial identification and protection of historical Aboriginal rights, through the application of general constitutional principles. On the other hand, it serves as a springboard for negotiations leading to just settlements, in which Aboriginal rights are recognized in a modern form and reconciled with the interests of the larger society. In both cases, the process is informed by the honour of the Crown.