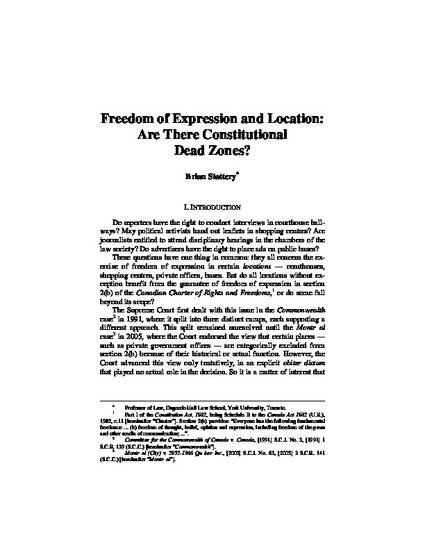 Does the guarantee of freedom of expression in section 2(b) of the Charter cover all locations without exception, or do some fall beyond its scope? the Supreme Court of Canada first dealt with this issue in the Commonwealth case in 1991, where it split into three distinct camps, each supporting a different approach. This split remained unresolved until the Montréal case in 2005, where the Court held that certain places — such as private government offices — are categorically excluded from section 2(b) because of their historical or actual function. However, the Court advanced this view only tentatively, in an explicit obiter dictum that played no role in the decision. In the recent Vancouver case of 2009, the Supreme Court has thrown caution to the winds and formally endorsed the Montréal approach. I believe the Court has taken a wrong turn on this point, one that leads down a blind alley. In this article I attempt to explain why and to suggest a solution.