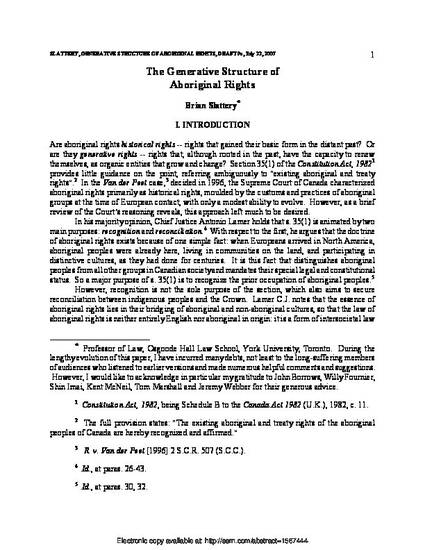 Are aboriginal rights historical rights -- rights that gained their basic form in the distant past? Or are they generative rights -- rights that, although rooted in the past, have the capacity to renew themselves, as organic entities that grow and change? Section 35(1) of the Constitution Act, 1982 provides little guidance on the point, referring ambiguously to existing aboriginal and treaty rights. In the Van der Peet case, decided in 1996, the Supreme Court of Canada characterized aboriginal rights primarily as historical rights, moulded by the customs and practices of aboriginal groups at the time of European contact, with only a modest ability to evolve. However the Court's reasoning on this point left much to be desired, and in the decade since the Van der Peet case was decided the Supreme Court has shown mounting signs of discomfort with the test laid down there. In a series of important decisions, it has quietly initiated the process of reshaping the test's basic tenets. Here I take stock of the matter and argue that these trends presage the birth of a new constitutional paradigm, in which aboriginal rights are viewed as generative and not merely historical rights.