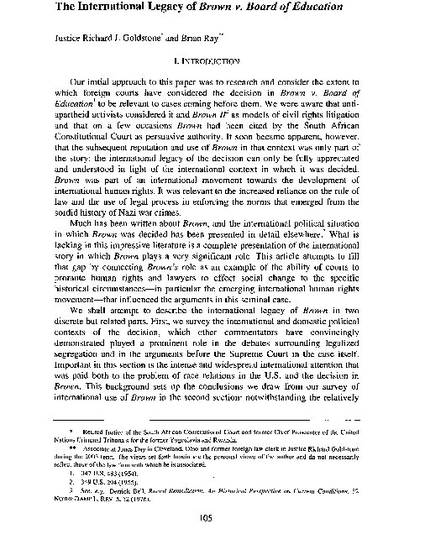 The authors describe the international legacy of Brown v. Board of Education in two discrete but related parts. First, they survey the international and domestic political contexts of the decision, which other commentators have convincingly demonstrated played a prominent role in the debates surrounding legalized segregation and in the arguments before the Supreme Court in the case itself. Important in this section is the intense and widespread international attention that was paid both to the problem of race relations in the U.S. and the decision in Brown. This background sets up the conclusions the authors draw from their survey of international use of Brown in the second section: notwithstanding the relatively few actual citations to Brown, its importance as an example of social change through the legal process-and in the face of apparent majority opposition-has enabled Brown and the United States model of democracy generally to play a significant role in the development of human rights throughout the world.