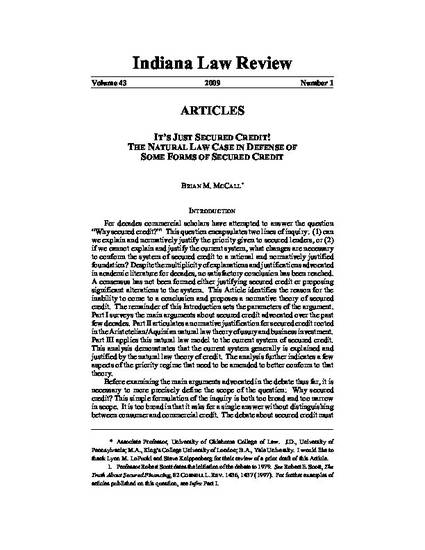 Article
It's Just Secured Credit: The Natural Law Case in Defense of Some Forms of Secured Credit
Indiana Law Review (2009)
Download Find in your library
Abstract

For decades scholars have been debating whether of not the institution of security can be explained and justified. After much discussion from varying points of view and hermeneutics, although some insights have been gained, the answer to the original question remains unresolved. This article attempts to bring new life to this debate by building on Professors Mooney and Harris’ idea of security interest as property right while taking account of the valid concerns of scholars such as Elizabeth Warren and Lyn Lopucki that certain results produced by the current system seem unjust. This reconciliation of these two strands of secured credit theory is rooted in the article’s wider scope of consideration. Security Interests cannot be evaluated normatively outside of the contexts in which they are employed. Using the natural law theory of usury and business credit to distinguish the lending of money for consumption from the investment of capital in a business, the article concludes that the use of security as a device for achieving various agreements among capital investors in a business venture is just. Once the system in principle is justified, the article suggests three specific changes to particular aspects of existing law which are necessary to conform more completely secured credit law in the business finance context to this normative theory which provides for its justification. Thus, the conclusion may be more modest than the hopes of the original debate. All security is not explained and justified in every context. Yet, this more limited scope may provide the key to solving the puzzle of secured credit. Perhaps scholars have failed to agree on the answer to the original question because the answer is more subtle than a simple yes or no. Secured Credit can be explained and justified but not for the same reason in every context. The article provides the answer in the context of business credit by exploring the interaction of security with the principles of natural law theory of business credit and investment.