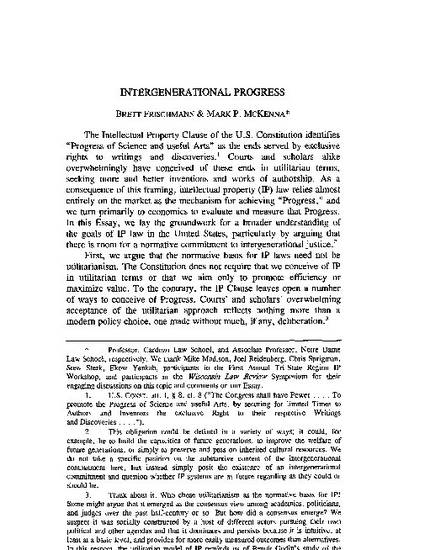 This Essay prepared for the Wisconsin Law Review’s symposium on Intergenerational Equity lays the groundwork for a broader understanding of the goals of IP law in the United States by arguing that there is room for a normative commitment to intergenerational justice. First, we argue that the normative basis for IP laws need not be utilitarianism. The Constitution does not require that we conceive of IP in utilitarian terms or that we aim only to promote efficiency or maximize value. To the contrary, the IP Clause leaves open a number of ways to conceive of Progress; courts’ and scholars’ overwhelming acceptance of the utilitarian approach reflects nothing more than a modern policy choice. Second, we argue that acceptance of the utilitarian frame has led too easily to reliance on markets as the exclusive mechanism for achieving Progress, which has had a dramatic impact on the path of IP law and discourse. Specifically, we argue that, because it relies so heavily on the market, and because the market is inherently short-sighted, IP is less future regarding than it could be. This is disappointing because the subject matter of IP makes it particularly susceptible to the promotion of intergenerational progress. In the end, we conclude that a commitment to intergenerational justice is both compatible with Progress and normatively attractive. intellectual property, intergenerational equity, utilitarian, shortsighted