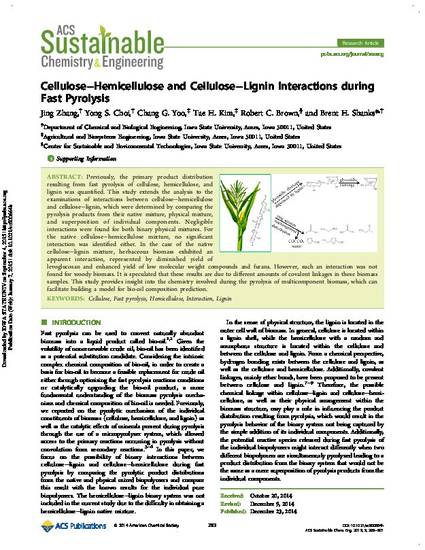 Article
Cellulose–Hemicellulose and Cellulose–Lignin Interactions during Fast Pyrolysis
ACS Sustainable Chemistry & Engineering
Download Find in your library
Document Type
Article
Disciplines
Publication Version
Published Version
Publication Date
DOI
10.1021/sc500664h
Abstract
Previously, the primary product distribution resulting from fast pyrolysis of cellulose, hemicellulose, and lignin was quantified. This study extends the analysis to the examinations of interactions between cellulose–hemicellulose and cellulose–lignin, which were determined by comparing the pyrolysis products from their native mixture, physical mixture, and superposition of individual components. Negligible interactions were found for both binary physical mixtures. For the native cellulose–hemicellulose mixture, no significant interaction was identified either. In the case of the native cellulose–lignin mixture, herbaceous biomass exhibited an apparent interaction, represented by diminished yield of levoglucosan and enhanced yield of low molecular weight compounds and furans. However, such an interaction was not found for woody biomass. It is speculated that these results are due to different amounts of covalent linkages in these biomass samples. This study provides insight into the chemistry involved during the pyrolysis of multicomponent biomass, which can facilitate building a model for bio-oil composition prediction.
Comments