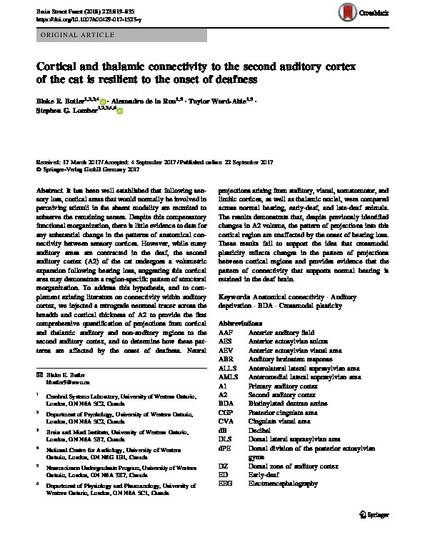 It has been well established that following sensory loss, cortical areas that would normally be involved in perceiving stimuli in the absent modality are recruited to subserve the remaining senses. Despite this compensatory functional reorganization, there is little evidence to date for any substantial change in the patterns of anatomical connectivity between sensory cortices. However, while many auditory areas are contracted in the deaf, the second auditory cortex (A2) of the cat undergoes a volumetric expansion following hearing loss, suggesting this cortical area may demonstrate a region-specific pattern of structural reorganization. To address this hypothesis, and to complement existing literature on connectivity within auditory cortex, we injected a retrograde neuronal tracer across the breadth and cortical thickness of A2 to provide the first comprehensive quantification of projections from cortical and thalamic auditory and non-auditory regions to the second auditory cortex, and to determine how these patterns are affected by the onset of deafness. Neural projections arising from auditory, visual, somatomotor, and limbic cortices, as well as thalamic nuclei, were compared across normal hearing, early-deaf, and late-deaf animals. The results demonstrate that, despite previously identified changes in A2 volume, the pattern of projections into this cortical region are unaffected by the onset of hearing loss. These results fail to support the idea that crossmodal plasticity reflects changes in the pattern of projections between cortical regions and provides evidence that the pattern of connectivity that supports normal hearing is retained in the deaf brain.