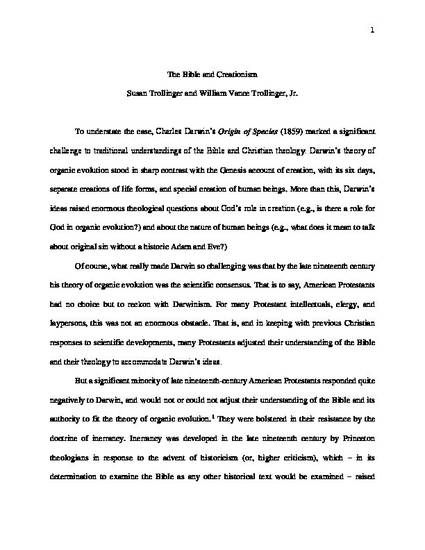 Charles Darwin’s Origin of Species (1859) marked a significant challenge to traditional understandings of the Bible and Christian theology. Darwin’s theory of organic evolution stood in sharp contrast with the Genesis account of creation, with its six days, separate creations of life forms, and special creation of human beings. More than this, Darwin’s ideas raised enormous theological questions about God’s role in creation (e.g., is there a role for God in organic evolution?) and about the nature of human beings (e.g., what does it mean to talk about original sin without a historic Adam and Eve?)

Of course, what really made Darwin so challenging was that by the late nineteenth century his theory of organic evolution was the scientific consensus. That is to say, American Protestants had no choice but to reckon with Darwinism. For many Protestant intellectuals, clergy, and laypersons, this was not an enormous obstacle. That is, and in keeping with previous Christian responses to scientific developments, many Protestants adjusted their understanding of the Bible and their theology to accommodate Darwin’s ideas.