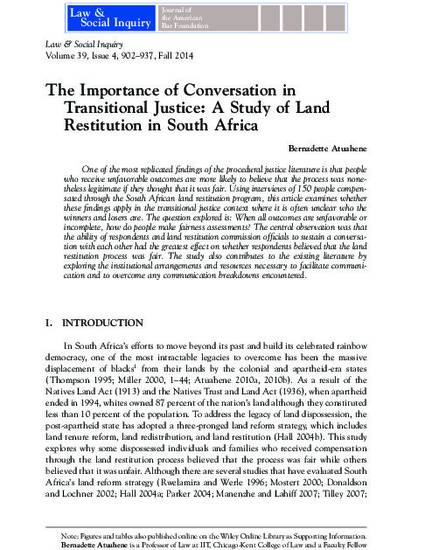 Article
The Importance of Conversation in Transitional Justice: A Study of Land Restitution in South Africa
Law and Social Inquiry (2014)
Download Find in your library
Abstract

One of the most replicated findings of the procedural justice literature is that people who receive unfavorable outcomes are more likely to believe that the process was nonetheless legitimate if they thought that it was fair. Using interviews of 150 people compensated through the South African land restitution program, this article examines whether these findings apply in the transitional justice context where it is often unclear who the winners and losers are. The question explored is: When all outcomes are unfavorable or incomplete, how do people make fairness assessments? The central observation was that the ability of respondents and land restitution commission officials to sustain a conversation with each other had the greatest effect on whether respondents believed that the land restitution process was fair. The study also contributes to the existing literature by exploring the institutional arrangements and resources necessary to facilitate communication and to overcome any communication breakdowns encountered.