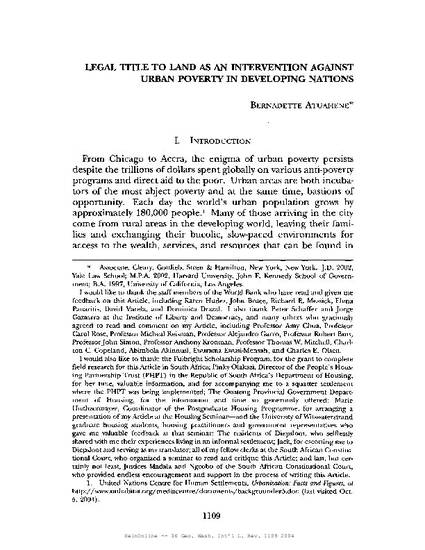 One intervention intended to ameliorate poverty and its subsidiary effects is the distribution of legal title to land to poor urban dwellers, otherwise known as land titling. Given the billions of dollars that the World Bank, country-based development agencies, regional development banks, and developing countries themselves have spent on land titling programs, it has become one of the most important property law issues confronting the developing world. Several countries have undertaken comprehensive urban land titling programs to transform the dwellings of those who live in the squalor of squatter settlements into assets recognized by the formal sector. This Article accepts as a given that land titling programs are moving forward and millions of dollars are being spent on them - the purpose of this Article is to take the next step of evaluating how such programs are best designed. The goal of urban titling programs should be to remove structural barriers that contribute to cycles of poverty by limiting indigent populations' access to opportunity and their long-term ability to succeed. First, this Article reviews the literature regarding land titling to give a sense of how my contributions are situated within the larger academic discussion. Second, I develop a theory of how best to achieve titling mobility, which is a goal attained when the state allocates land title in a manner that eliminates structural barriers that impair poor people's social mobility and ability to accumulate wealth in the long-term. I argue that favorable location of titled land, and procedures that ensure equitable distribution of title among women and men, are essential. Third, I use the Peruvian, Philippine, and South African land titling programs as models to test my theory of how best to achieve titling mobility, by investigating how each government's method of allocating land titles affects poor populations. Fourth, I examine the distributional consequences of titling programs by focusing on who benefits from the resources expended and suggest how the Peruvian, Philippine, and South African models should be adjusted to comport with my theory of how best to achieve titling mobility.