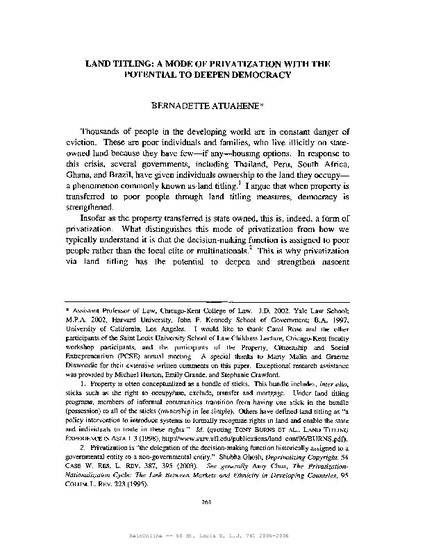 Land titling is a form of privatization in that public assets are transferred to private families and individuals. This is unlike other forms of privatization, however, because there is a systematic diffusion of economic and decision making power down to indigent populations rather than out of the country or up to its local elites. In light of this uniqueness, the question I will grapple with in this Article is, can property ownership, achieved through land titling programs, bolster democracy? First, using Peru as an example, I explain the context that necessitated the creation of land titling and the process by which informal holdings are legally recognized. Second, I argue that there are four primary ways that land titling strengthens democracy. By creating a property owning society, land titling: 1. Gives indigent populations a buffer between themselves and the State, which allows them to make the independent electoral decisions vital to a functioning democracy; 2. Makes poor people stakeholders in democratic institutions; 3. Gives people an incentive to secure greater liberties; and 4. Provides a space where individual autonomy is respected and minority viewpoints, critical to a healthy democracy, can thrive.