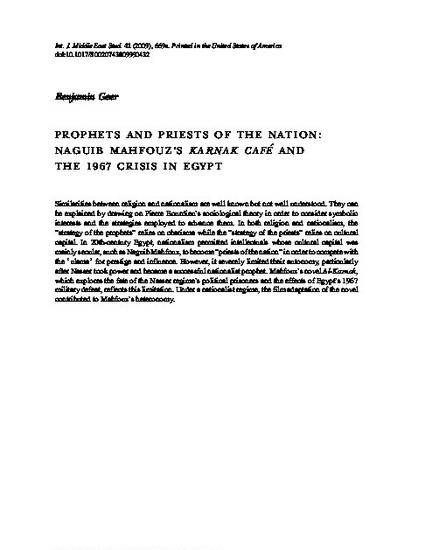 Article
Prophets and Priests of the Nation: Naguib Mahfouz’s Karnak Café and the 1967 Crisis in Egypt
International Journal of Middle East Studies (2009)
Download Find in your library
Abstract

Similarities between religion and nationalism are well known but not well understood. They can be explained by drawing on Pierre Bourdieu's sociological theory in order to consider symbolic interests and the strategies employed to advance them. In both religion and nationalism, the “strategy of the prophets” relies on charisma while the “strategy of the priests” relies on cultural capital. In 20th-century Egypt, nationalism permitted intellectuals whose cultural capital was mainly secular, such as Naguib Mahfouz, to become “priests of the nation” in order to compete with the ʿulamaʾ for prestige and influence. However, it severely limited their autonomy, particularly after Nasser took power and became a successful nationalist prophet. Mahfouz's novel Al-Karnak, which explores the fate of the Nasser regime's political prisoners and the effects of Egypt's 1967 military defeat, reflects this limitation. Under a nationalist regime, the film adaptation of the novel contributed to Mahfouz's heteronomy.