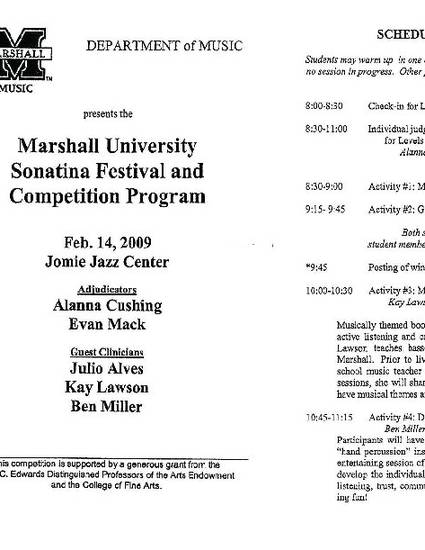 This competition is supported by a generous grant from the Joan C. Edwards Distinguished Professors of the Arts Endowment and the College of Fine Arts.

Kay Lawson - Musically themed books and stories that engage any age in active listening and creative play will be read-aloud. Kay Lawson teaches bassoon and music education courses at Marshall. Prior to living in Huntington, she was a public school music teacher in Minot, North Dakota. During her sessions, she will share her interest in children's books that have musical themes and artful illustrations.

Ben Miller - Participants will have the opportunity to play a variety of "hand percussion" instruments in an informal, relaxed and entertaining session of rhythm making. The activity works to develop the individual member's skills in rhythm, ensemble listening, trust, communication and, most importantly, having fun!

Dr. Ben Miller is Professor of Music at Marshall University where he serves as Percussion Instructor and Assistant Director of Bands. Many elementary school students know Ben as "Professor Boom Boom" who demonstrates his unique collection of percussion instruments from around the world and addresses the similarities of various cultures through percussion instruments and rhythm.

Júlio Alves - Learn a basic chord progression and strumming techniques to apply to a melody and proper positioning and posture for playing the guitar.

Early in his career, Evan performed throughout the Catskills-Hudson Valley regions of New York, Pennsylvania, and New Jersey, an area steeped in classical tradition, but more known for Woodstock and Orange County Choppers!

In 2001 Evan won the Vanderbilt University Concerto Competition, and later performed Samuel Barber's Piano Concerto with the Vanderbilt Symphonic Orchestra. He was also a guest artist of the Blair Woodwind Ensemble for its premiere of a composition by Dana Wilson.

Evan has given solo recitals with much acclaim in Las Vegas, Cincinnati, Charleston, Nashville, and throughout the Northeast and Midwest. Most recently, Evan has performed in the Kentucky Symphony Ragtime Band, the Kentucky Symphony, the Cincinnati Symphony Chamber Players, The West Virginia Symphony, the Dayton Philharmonic, and the Cincinnati Symphony Orchestra. For the last two years, Mack has been performing American piano music all over the U.S. and the world including Barcelona, Spain for the IV Forum lnterncional De Musica Barcelona Ciutat and as an artist-in-residence in The University of the Northwest in Potchefstroom, South Africa.

As a composer, Evan has produced five full musicals (three of them for children's theater), as well as numerous popular songs, and numerous classical works. Most recently, his Langston Hughes' Dream of Freedom, for choir, 2 soloists, and piano was performed at the National Underground Railroad Freedom Center. The work is slated to for publication in the fall. His most current project is a full-length opera called Angel of the Amazon.

Alanna Cushing is from Charleston, West Virginia. Alanna will complete her Masters degree in Piano Performance this spring at Bowling Green State University where she studies with Dr. Robert Satterlee. Alanna is an active performer and has an assistantship in accompanying. She received honorable mention in Bowling Green's Dr. Marjorie Conrad Peatee Art Song Competition for her work with soprano Marlayna Maynard. Alanna has also recently participated in masterclasses with Margot Garrett, Catherine Kautsky, and Angela Cheng. Alanna plays with the New Music Ensemble and frequently forms at Bowling Green's annual New Music Festival. This past summer, Alanna was also invited to be a guest teacher at Bowling Green's Summer Music Institute. During the summer of 2006, Alanna attended the Contemporary Music Festival in Cortona, Italy where she premiered a work by British composer, Graham Lynch.

She received a Bachelor of Fine Arts degree in Piano Performance from Marshall University where she studied with Dr. Leslie Petteys. During her time at Marshall, she was the winner of several competitions including the Belle and Lynum Jackson Soloist Competition and the Marshall University Symphony Orchestra Concerto Competition. Alanna also worked closely with the composition department at Marshall, premiering several new works by student and professional composers including Dr. Erik Lund from the University of Illinois in addition to recording several works on the SCI Student Composers CD. Alanna enjoys playing modern music and hopes to pursue a Doctorate in Contemporary Music Performance.

A special thank you to everyone who helped make this Festival and the Evan Mack residency possible: to Dean Van Horn and the College of Fine Arts; Dr. Jeff Pappas, Chair of the Music Dept. and his administrative assistants Beverly McKinney and Ruby Dean for their expertise, patience, and financial support; to my stellar adjudicators Evan Mack and Alanna Cushing; to Professors Steve Barnett, Wendell Dobbs, Ann Bingham and Kay Lawson for their sage advice; to Mindy Kelle and the students of Marshall's CMENC chapter and Nicole Mccomas and Mike Preston and the students of the collegiate MTNA chapter for their time and assistance; to my husband, Skip Campbell for his photographic skills; to Allison Thorp and Natasha Beverly who helped keep me organized; and to my terrific clinicians professors Ben Miller, Julio Alves and Kay Lawson for volunteering their time.

We, in the Marshall Music Department, are proud to be able to support the Evan Mack Residency and our first (hopefully annual) Sonatina Festival and Competition. Thanks to all of the students, teachers and parents for their participation.