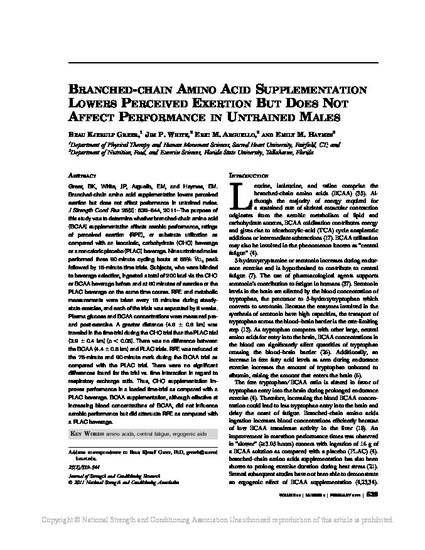 The purpose of this study was to determine whether branched-chain amino acid (BCAA) supplementation affects aerobic performance, ratings of perceived exertion (RPE), or substrate utilization as compared with an isocaloric, carbohydrate (CHO) beverage or a noncaloric placebo (PLAC) beverage. Nine untrained males performed three 90-minute cycling bouts at 55% VO₂ peak followed by 15-minute time trials. Subjects, who were blinded to beverage selection, ingested a total of 200 kcal via the CHO or BCAA beverage before and at 60 minutes of exercise or the PLAC beverage on the same time course. RPE and metabolic measurements were taken every 15 minutes during steady-state exercise, and each of the trials was separated by 8 weeks. Plasma glucose and BCAA concentrations were measured pre- and post-exercise. A greater distance (4.6 ± 0.6 km) was traveled in the time-trial during the CHO trial than the PLAC trial (3.9 ± 0.4 km) (p < 0.05). There was no difference between the BCAA (4.4 ± 0.5 km) and PLAC trials. RPE was reduced at the 75-minute and 90-minute mark during the BCAA trial as compared with the PLAC trial. There were no significant differences found for the trial vs. time interaction in regard to respiratory exchange ratio. Thus, CHO supplementation improves performance in a loaded time-trial as compared with a PLAC beverage. BCAA supplementation, although effective at increasing blood concentrations of BCAA, did not influence aerobic performance but did attenuate RPE as compared with a PLAC beverage.