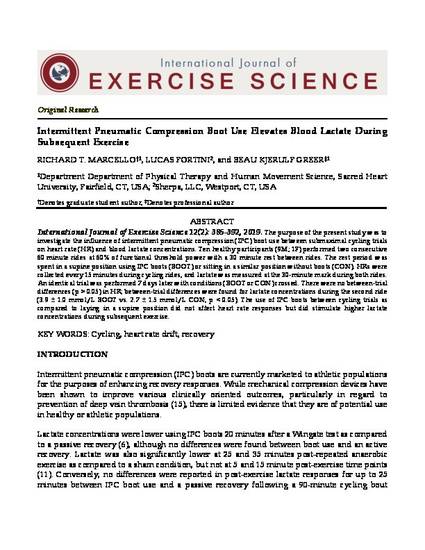 The purpose of the present study was to investigate the influence of intermittent pneumatic compression (IPC) boot use between submaximal cycling trials on heart rate (HR) and blood lactate concentrations. Ten healthy participants (9M; 1F) performed two consecutive 60 minute rides at 60% of functional threshold power with a 30 minute rest between rides. The rest period was spent in a supine position using IPC boots (BOOT) or sitting in a similar position without boots (CON). HRs were collected every 15 minutes during cycling rides, and lactate was measured at the 30-minute mark during both rides. An identical trial was performed 7 days later with conditions (BOOT or CON) crossed. There were no between-trial differences (p > 0.05) in HR; between-trial differences were found for lactate concentrations during the second ride (3.9 ± 1.0 mmol/L BOOT vs. 2.7 ± 1.5 mmol/L CON, p < 0.05). The use of IPC boots between cycling trials as compared to laying in a supine position did not affect heart rate responses but did stimulate higher lactate concentrations during subsequent exercise.