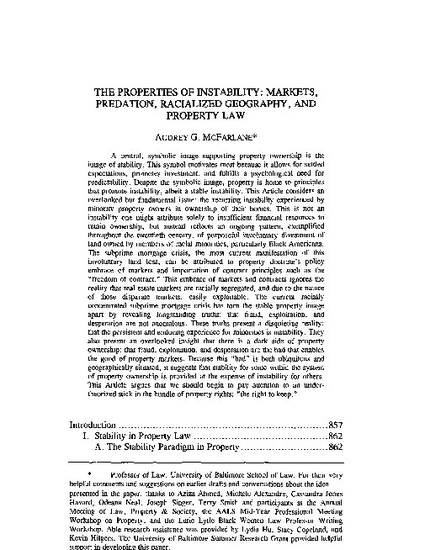 A central, symbolic image supporting property ownership is the image of stability. This symbol motivates most because it allows for settled expectations, promotes investment, and fulfills a psychological need for predictability. Despite the symbolic image, property is home to principles that promote instability, albeit a stable instability. This Article considers an overlooked but fundamental issue: the recurring instability experienced by minority property owners in ownership of their homes. This is not an instability one might attribute solely to insufficient financial resources to retain ownership, but instead reflects an ongoing pattern, exemplified throughout the twentieth century, of purposeful involuntary divestment of land owned by members of racial minorities, particularly Black Americans. The subprime mortgage crisis, the most current manifestation of this involuntary land loss, can be attributed to property doctrine’s policy embrace of markets and importation of contract principles such as the “freedom of contract.” This embrace of markets and contracts ignores the reality that real estate markets are racially segregated, and due to the nature of those disparate markets, easily exploitable. The current racially concentrated subprime mortgage crisis has torn the stable property image apart by revealing longstanding truths: that fraud, exploitation, and desperation are not anomalous. These truths present a disquieting reality: that the persistent and enduring experience for minorities is instability. They also present an overlooked insight that there is a dark side of property ownership: that fraud, exploitation, and desperation are the bad that enables the good of property markets. Because this “bad” is both ubiquitous and geographically situated, it suggests that stability for some within the system of property ownership is provided at the expense of instability for others. This Article argues that we should begin to pay attention to an under-theorized stick in the bundle of property rights: “the right to keep.”