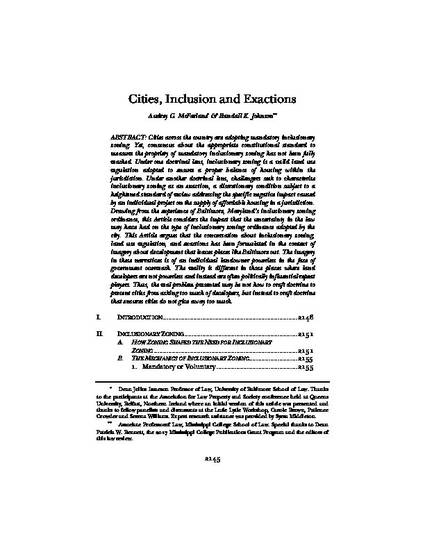 Cities across the country are adopting mandatory inclusionary zoning. Yet, consensus about the appropriate constitutional standard to measure the propriety of mandatory inclusionary zoning has not been fully reached. Under one doctrinal lens, inclusionary zoning is a valid land use regulation adopted to ensure a proper balance of housing within the jurisdiction. Under another doctrinal lens, challengers seek to characterize inclusionary zoning as an exaction, a discretionary condition subject to a heightened standard of review addressing the specific negative impact caused by an individual project on the supply of affordable housing in a jurisdiction. Drawing from the experience of Baltimore, Maryland’s inclusionary zoning ordinance, this Article considers the impact that the uncertainty in the law may have had on the type of inclusionary zoning ordinance adopted by the city. This Article argues that the conversation about inclusionary zoning, land use regulation, and exactions has been formulated in the context of imagery about development that leaves places like Baltimore out. The imagery in these narratives is of an individual landowner powerless in the face of government overreach. The reality is different in those places where land developers are not powerless and instead are often politically influential repeat players. Thus, the real problem presented may be not how to craft doctrine to prevent cities from asking too much of developers, but instead to craft doctrine that ensures cities do not give away too much.