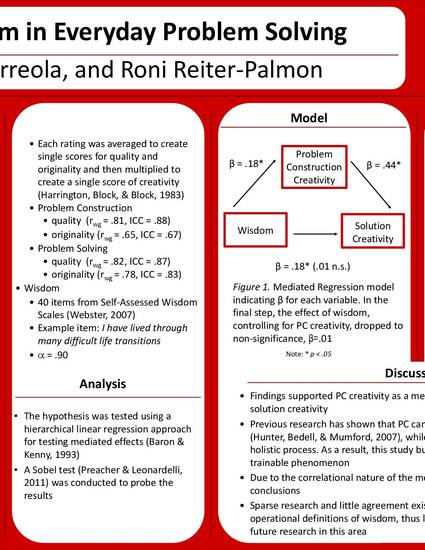 Creativity is conceptualized as an idea or product that is both original and high in quality (Amabile, 1996). Researchers have sought to better understand the creative process by examining predictors of creative outcomes. Wisdom may play a predictive role in this process. According to Webster (2003), wisdom is the competency in, and application of, critical life experiences to optimize development of the self, as well as others. Research has suggested that wisdom supports creativity at an implicit level (Sternberg, 1985, 1999), and contributes to creative achievements (Helson & Srivastava, 2002).

Process models of creativity have sought to demonstrate cognitive operations that contribute to creativity. Problem construction (PC) is the act of structuring and making sense out of an ill-defined problem and is a cognitive operation found to consistently predict creativity (Okuda, Runco, & Berger, 1991). How we interpret problems may draw on past experiences (Mumford, Reiter-Palmon, & Redmond, 1994), therefore PC may play a key role in explaining the relationship between wisdom and creativity.

Presented at the American Psychological Association Conference in Washington, D.C.