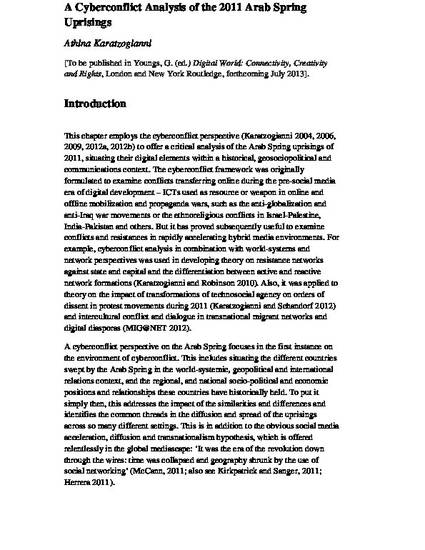 A cyberconflict perspective on the Arab Spring focuses in the first instance on the environment of cyberconflict. This includes situating the different countries swept by the Arab Spring in the world-systemic, geopolitical and international relations context, and the regional, and national socio-political and economic positions and relationships these countries have historically held. To put it simply then, this addresses the impact of the similarities and differences and identifies the common threads in the diffusion and spread of the uprisings across so many different settings. This is in addition to the obvious social media acceleration, diffusion and transnationalism hypothesis, which is offered relentlessly in the global mediascape: ‘It was the era of the revolution down through the wires: time was collapsed and geography shrunk by the use of social networking’ (McCann, 2011; also see Kirkpatrick and Sanger, 2011; Herrera 2011). A second cluster of issues involves the political economy of communications in each country, and particularly e-governance issues and digital infrastructure development. Arab Spring countries were in different stages of digital development. The regimes involved took different steps to cut the digital lifelines from the protesters. Digital networked everyday media and social media networks were used in creative ways to connect the protest both internally and externally to international players, media actors and global opinion, and to plan and accelerate protest mobilizations. This is in line with previous empirical evidence in a long decade of academic scholarship in information and communication technology (ICT) use in social movements and activism. Yet, the role of social media and digital networks were mediatized in the global public sphere during the Arab Spring as an unprecedented phenomenon. Here established mainstream media coverage of the events, the protesters and the governments involved is still relevant. For example, questions include: what ideologies, constructions of social and political identities, representations of and by protesters can be located, what is the level of regime censorship, alternative sources and media effects on policy, who is winning the political contest – the international buy-in, and how is this accomplished? A major component of new media theory in conjunction with Internet studies would also have to be employed to situate the tech/digital/online/cyber activism of the Arab Spring in the wider history of protest, resistance and digital activism. Here, there is need to place this Arab digital resistance within wider networks of discontent and protest against the neoliberal capitalist order in a time of global financial crisis. This includes the use of social media, and media movements/protests in Europe against austerity in Greece, Italy, Spain, Portugal and the Occupy movement assemblage. Also, questions about what type of democratization can occur in such a context: ‘the claim of US-led war and occupation unleashing the Arab Spring is the flipside of the argument that promotion of the undemocratic economic order is essential to the region’s democratic transition’ (Dixon 2011: 314). Indeed, the debate whether digital media were a cause or just a tool in the Arab Spring is a superficial one in the context of a long history of online activism. This starts with the Zapatistas in the mid-1990s against neoliberal capitalist expansions and accumulation by dispossession in an alienating hierarchical order operating on the social logic of state and capital. It is therefore critical to probe deeper. A cyberconflict analysis involves a third cluster of issues employing social movement and resource mobilization theories: the effect of ICTs on mobilization structures, organizational forms, participation, recruitment, tactics and goals of protesters, as well as changes in framing processes and the impact of the political opportunity structure on resistances. These framing processes and opportunity structure are critical, because the wave character of the diffusion of protests in different countries resembled Eastern Europe in 1989, where the window in the structure opened with the collapse of the USSR. Also, digital media and social networking as enabling resistance through hacktivism (or invariably termed digital, tech, cyber, network activism) and information warfare would have to be discussed in a variety of settings, especially in relation to media movements, ad hoc assemblages and collectives engaging during the Arab Spring (for example, the hacktivist group Anonymous and their cyberattacks and other activities in support for the uprisings). Lastly, in relation to ethnic, ethnoreligious and cultural conflicts occurring simultaneously with the uprisings, we need to consider how group identities are constructed in relation to ethnic/religious/cultural difference or in this case also gender difference, and structural mapping of contexts. This chapter concentrates only on a few of what are – in my view – the critical issues found in these clusters of cyberconflict analysis which might prove relevant to future theorizations of the Arab Spring. Some of the threads left out can be equally critical, for example there is no space to delve into the Palestinian issue, which is at the heart of Arab concerns. Before the analysis, a very brief description of the Arab Spring is required.