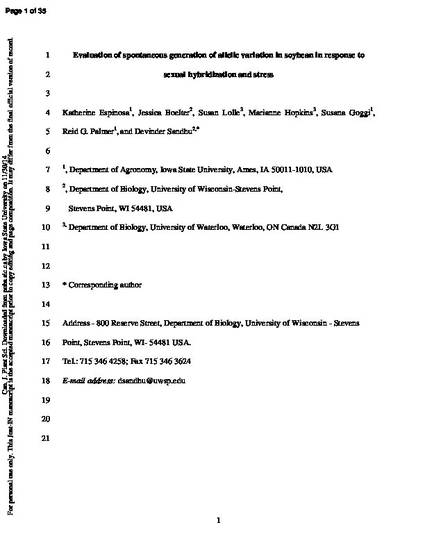 Intra-cultivar variation reported in pure lines of soybean has been hypothesized to result from genetic mechanisms contributing to de novo genetic variation. In this study we have detected allele switching by following segregation pattern of Aconitase-4 isozyme in sexual crosses and pure lines. In sexual crosses, one F2 plant showed switch at the Aconitase- 4 (Aco4) locus from the expected heterozygous genotype Aco4-ac to Aco4-ab. In the pure lines grown in a honeycomb planting design and treated with an accelerated aging test, multiple cases of allele switching were detected at the Aco4 locus. Both single and double switches were detected that were stable and heritable. These findings indicate that the generation of endogenous variation continues in pure lines as a result of intrinsic genetic mechanisms. With a long-term goal of understanding the genetic nature of the changes, we genetically mapped the Aco4 gene to a 3.3 cM region on Chromosome 11. The corresponding physical region is ~293 kb with 39 predicated genes. Of these, Glyma.11g080600 is of particular interest, as it shows 93% and 88% identity to Medicago truncatula and Arabidopsis aconitase genes, respectively. Further characterization of the soybean Aco4 gene may shed light on genetic mechanisms responsible for allele switching.

This is a manuscript of an article published as Espinosa, Katherine, Jessica Boelter, Susan Lolle, Marianne Hopkins, Susana Goggi, Reid G. Palmer, and Devinder Sandhu. "Evaluation of spontaneous generation of allelic variation in soybean in response to sexual hybridization and stress." Canadian Journal of Plant Science 95, no. 2 (2015): 405-415. doi: 10.1139/CJPS-2014-324. Posted with permission.