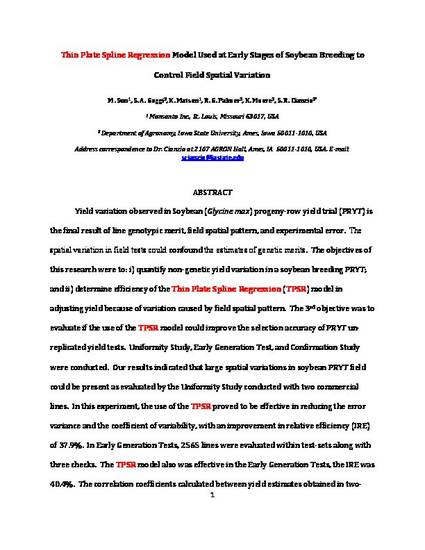 Yield variation observed in Soybean (Glycine max) progeny‐row yield trial (PRYT) is the final result of line genotypic merit, field spatial pattern, and experimental error. The spatial variation in field tests could confound the estimates of genetic merits. The objectives of this research were to: i) quantify non‐genetic yield variation in a soybean breeding PRYT; and ii) determine efficiency of the Thin Plate Spline Regression (TPSR) model in adjusting yield because of variation caused by field spatial pattern. The 3rd objective was to evaluate if the use of the TPSR model could improve the selection accuracy of PRYT unreplicated yield tests. Uniformity Study, Early Generation Test, and Confirmation Study were conducted. Our results indicated that large spatial variations in soybean PRYT field could be present as evaluated by the Uniformity Study conducted with two commercial lines. In this experiment, the use of the TPSR proved to be effective in reducing the error variance and the coefficient of variability, with an improvement in relative efficiency (IRE) of 37.9%. In Early Generation Tests, 2565 lines were evaluated within test‐sets along with three checks. The TPSR model also was effective in the Early Generation Tests, the IRE was 40.4%. The correlation coefficients calculated between yield estimates obtained in two-year Early Generation Tests and Confirmation Study improved by 0.21 points compared with results from the non‐TPSR experiments. The results indicated that the use of TPSR model was effective in accounting for some of the spatial variation in field tests.