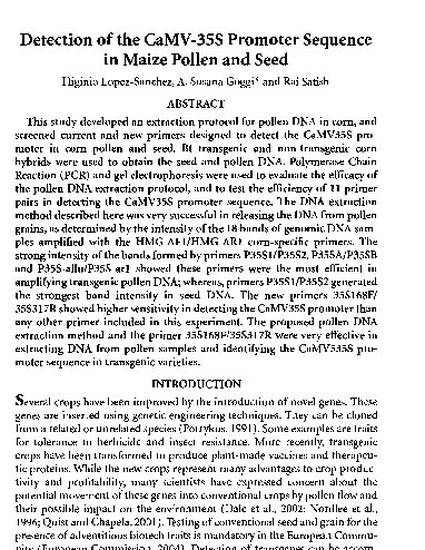 This study developed an extraction protocol for pollen DNA in corn, and screened current and new primers designed to detect the CaMV35S promoter in corn pollen and seed. Bt transgenic and non-transgenic corn hybrids were used to obtain the seed and pollen DNA. Polymerase Chain Reaction (PCR) and gel electrophoresis were used to evaluate the efficacy of the pollen DNA extraction protocol, and to test the efficiency of 11 primer pairs in detecting the CaMV35S promoter sequence. The DNA extraction method described here was very successful in releasing the DNA from pollen grains, as determined by the intensity of the 18 bands of genomic DNA samples amplified with the HMG-AF1/HMG-AR1 corn-specific primers. The strong intensity of the bands formed by primers P35S1/P35S2, P35SA/P35SB and P35S-aflu/P35S-ar1 showed these primers were the most efficient in amplifying transgenic pollen DNA; whereas, primers P35S1/P35S2 generated the strongest band intensity in seed DNA. The new primers 35S168F/35S317R showed higher sensitivity in detecting the CaMV35S promoter than any other primer included in this experiment. The proposed pollen DNA extraction method and the primer 35S168F/35S317R were very effective in extracting DNA from pollen samples and identifying the CaMV535S promoter sequence in transgenic varieties.

This article is published as Lopez-Sanchez, Higinio, A. Susana Goggi, and Rai Satish. "Detection of the CaMV-35S promoter sequence in maize pollen and seed." Seed Technology 27 (2005): 211-222. Posted with permission.