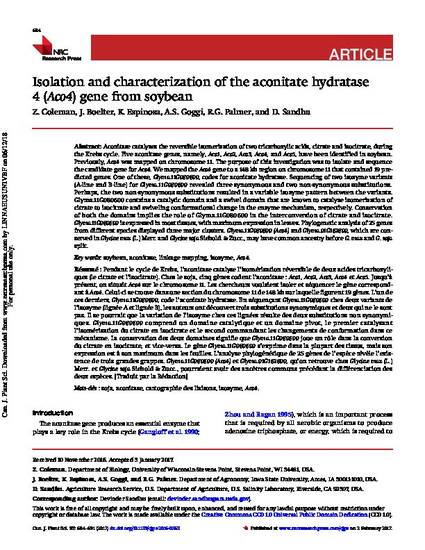 Aconitase catalyzes the reversible isomerization of two tricarboxylic acids, citrate and isocitrate, during the Krebs cycle. Five aconitase genes, namely, Aco1, Aco2, Aco3, Aco4, and Aco5, have been identified in soybean. Previously, Aco4 was mapped on chromosome 11. The purpose of this investigation was to isolate and sequence the candidate gene for Aco4. We mapped the Aco4 gene to a 148 kb region on chromosome 11 that contained 19 predicted genes. One of these, Glyma.11G080600, codes for aconitate hydratase. Sequencing of two isozyme variants (A-line and B-line) for Glyma.11G080600 revealed three synonymous and two non-synonymous substitutions. Perhaps, the two non-synonymous substitutions resulted in a variable isozyme pattern between the variants. Glyma.11G080600 contains a catalytic domain and a swivel domain that are known to catalyze isomerization of citrate to isocitrate and swiveling conformational change in the enzyme mechanism, respectively. Conservation of both the domains implies the role of Glyma.11G080600 in the interconversion of citrate and isocitrate. Glyma.11G080600 is expressed in most tissues, with maximum expression in leaves. Phylogenetic analysis of 25 genes from different species displayed three major clusters. Glyma.11G080600 (Aco4) and Glyma.01G162800, which are conserved in Glycine max (L.) Merr. and Glycine soja Siebold. & Zucc., may have common ancestry before G. max and G. soja split.

Rights
This work is free of all copyright and may be freely built upon, enhanced, and reused for any lawful purpose without restriction under copyright or database law. The work is made available under the Creative Commons CC0 1.0 Universal Public Domain Dedication (CC0 1.0).
Language
en
File Format
application/pdf
Citation Information
Z Coleman, J. Boelter, K. Espinosa, A. S. Goggi, et al.. "Isolation and characterization of the aconitate hydratase 4 (Aco4) gene from soybean" Canadian Journal of Plant Science Vol. 97 Iss. 4 (2017) p. 684 - 691
Available at: http://works.bepress.com/asusana-goggi/11/