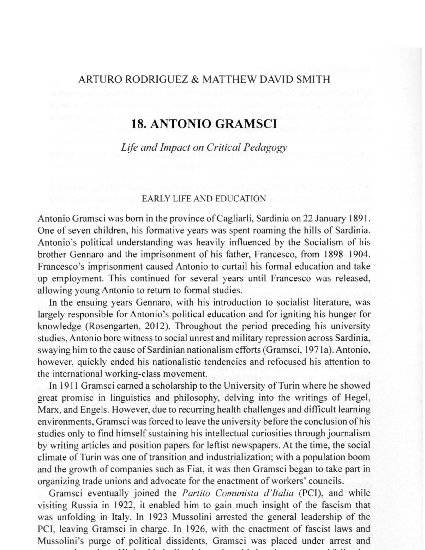 Contribution to Book
Antonio Gramsci: Life and Impact on Critical Pedagogy
A Critical Pedagogy of Resistance: 34 Pedagogues We Need to Know
Download
Document Type
Contribution to Books
Publication Date
Disciplines
Abstract
Antonio Gramsci was born in the province of Cagliarli, Sardinia on 22 January 1891. One of seven children, his formative years was spent roaming the hills of Sardinia. Antonio's political understanding was heavily influenced by the Socialism of his brother Gennaro and the imprisonment of his father, Francesco, from 1898-1904. Francesco's imprisonment caused Antonio to curtail his formal education and take up employment. This continued for several years until Francesco was released, allowing young Antonio to return to formal studies.
Copyright Statement

This document was originally published by Sense Publishers in A Critical Pedagogy of Resistance: 34 Pedagogues We Need to Know. Copyright restrictions may apply.