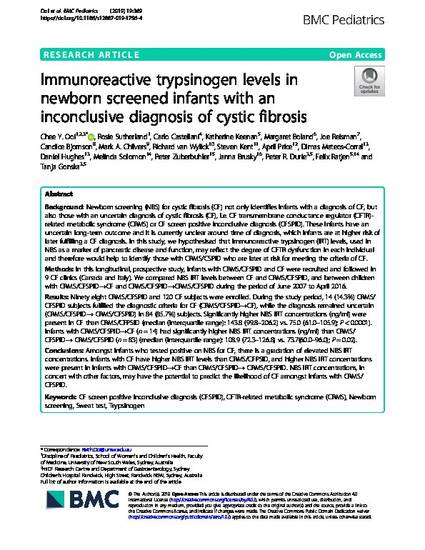 BACKGROUND:
Newborn screening (NBS) for cystic fibrosis (CF) not only identifies infants with a diagnosis of CF, but also those with an uncertain diagnosis of cystic fibrosis (CF), i.e. CF transmembrane conductance regulator (CFTR)-related metabolic syndrome (CRMS) or CF screen positive inconclusive diagnosis (CFSPID). These infants have an uncertain long-term outcome and it is currently unclear around time of diagnosis, which infants are at higher risk of later fulfilling a CF diagnosis. In this study, we hypothesised that immunoreactive trypsinogen (IRT) levels, used in NBS as a marker of pancreatic disease and function, may reflect the degree of CFTR dysfunction in each individual and therefore would help to identify those with CRMS/CSPID who are later at risk for meeting the criteria of CF.