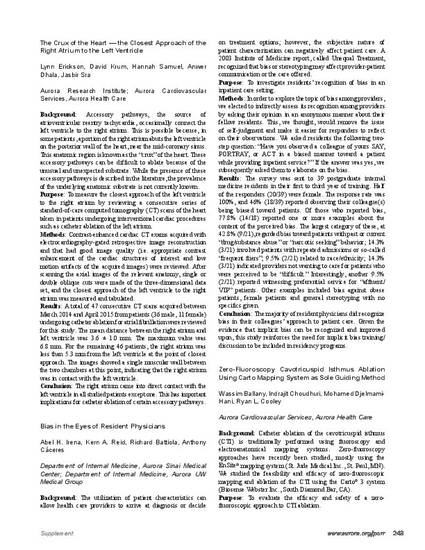 Background: Accessory pathways, the source of atrioventricular reentry tachycardia, occasionally connect the left ventricle to the right atrium. This is possible because, in some patients, a portion of the right atrium abuts the left ventricle on the posterior wall of the heart, near the mid-coronary sinus. This anatomic region is known as the “crux” of the heart. These accessory pathways can be difficult to ablate because of the unusual and unexpected substrate. While the presence of these accessory pathways is described in the literature, the prevalence of the underlying anatomic substrate is not currently known.

Purpose: To measure the closest approach of the left ventricle to the right atrium by reviewing a consecutive series of standard-of-care computed tomography (CT) scans of the heart taken in patients undergoing interventional cardiac procedures such as catheter ablation of the left atrium.

Methods: Contrast-enhanced cardiac CT exams acquired with electrocardiography-gated retrospective image reconstruction and that had good image quality (i.e. appropriate contrast enhancement of the cardiac structures of interest and low motion artifacts of the acquired images) were reviewed. After scanning the axial images of the relevant anatomy, single or double oblique cuts were made of the three-dimensional data set, and the closest approach of the left ventricle to the right atrium was measured and tabulated.

Conclusion: The right atrium came into direct contact with the left ventricle in all studied patients except one. This has important implications for catheter ablation of certain accessory pathways.