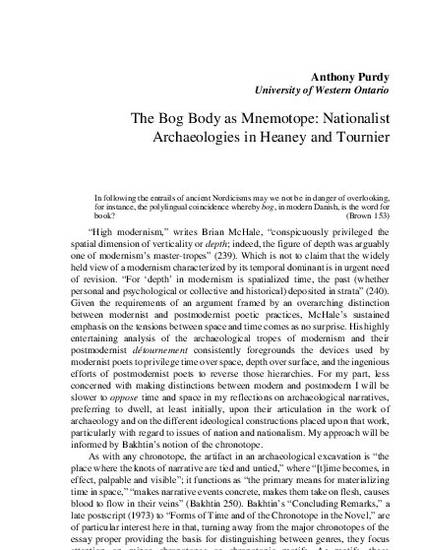 Article
The Bog Body as Mnemotope: Nationalist Archaeologies in Heaney and Tournier
Style (2002)
Download Find in your library
Abstract

The sometimes beautifully preserved Iron Age bodies that used to turn up from time to time in the peat-bogs of Northwestern Europe have moved and intrigued writers since P.V. Glob published his classic archaeological account, The Bog People, in 1965. Locating the specificity of the literary bog body in its ability to compress time, to render the past visible in the present, the article seeks to read the figure as a mnemotope, defined provisionally as any chronotopic motif which manifests the presence of the past, the conscious or unconscious memory traces of a more or less distant period in the life of a culture or an individual. Texts by Seamus Heaney and Michel Tournier serve to focus a study of the play of mnemotopic values in archaeologies purporting to shed light on the workings of national and cultural memory. The analysis foregrounds the part played by bog bodies in rhetorical strategies that have proved particularly controversial.