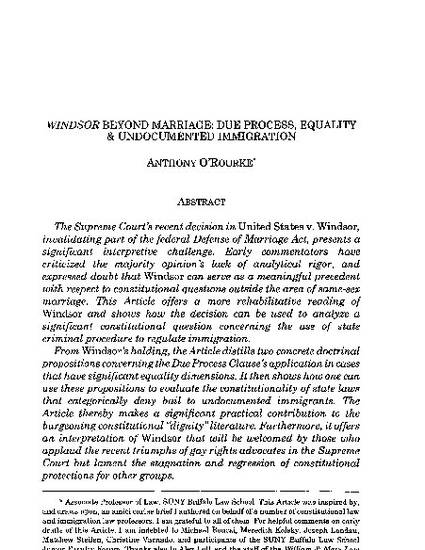 The Supreme Court’s recent decision in United States v. Windsor, invalidating part of the federal Defense of Marriage Act, presents a significant interpretive challenge. Early commentators have criticized the majority opinion’s lack of analytical rigor, and expressed doubt that Windsor can serve as a meaningful precedent with respect to constitutional questions outside the area of same-sex marriage. This short Article offers a more rehabilitative reading of Windsor, and shows how the decision can be used to analyze a significant constitutional question concerning the use of state criminal procedure to regulate immigration.

From Windsor’s holding, the Article distills two concrete doctrinal propositions concerning the Due Process Clause’s application in cases that have significant equality dimensions. It then shows how these propositions can be used to evaluate the constitutionality of state laws that categorically deny bail to undocumented immigrants. The Article thereby makes a practical contribution to the burgeoning constitutional “dignity” literature. Furthermore, it offers an interpretation of Windsor that will be welcomed by those who applaud the recent triumphs of gay-rights advocates in the Supreme Court, but lament the stagnation and regression of constitutional protections for other groups.