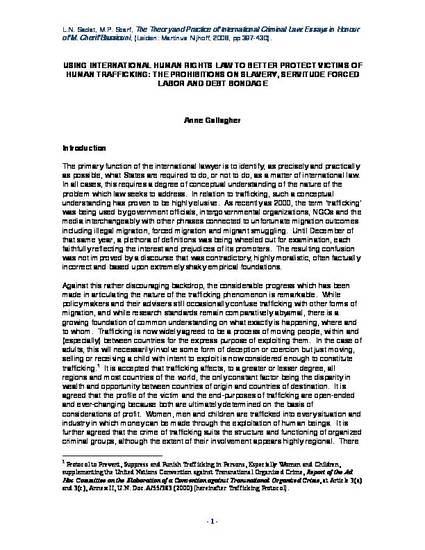 Trafficking was a matter for international human rights law long before it became an issue of migration or of transnational organized crime. However human rights law has not, on balance, been especially useful to victims of trafficking. Rarely are even the most clear-cut and uncontested provisions (e.g. those relating to slavery, debt bondage, forced marriage and forced labor) advanced in relation to a situation of trafficking. When such connections are made, their purpose is often rhetorical and, even when presented by legal scholars, conspicuously lacking in legal justification. While many examples could be cited, one of the most significant relates to the human rights treaty-bodies: the key enforcement mechanisms of the international human rights system. Despite this issue being raised with increasing frequency in the context of human rights treaty-body work, none of the relevant committees has managed to tie trafficking to a violation of a specific right in a specific treaty. Perhaps this is because trafficking is just too complicated. Perhaps it is because the norms themselves are devoid of sufficient content to support their application to real life. Perhaps the situation is aggravated by the fact that traffickers are generally bad people and bad organisations, not bad governments. The primary purpose of this Chapter is to flesh out several of the strongest and clearest human rights norms that could be applied to trafficking by the international human rights system, international and regional tribunals and national criminal justice agencies. These norms include the prohibition on slavery and the slave trade; the prohibition on forced labor; and the prohibition on debt bondage. The underlying rationale for this approach lies in the fact that even the most promising recent international legal developments do not appear to have made the process of prosecuting traffickers and protecting victims much easier. It may be time to go back to basics: to take out of cold storage our oldest, strongest and most widely accepted laws to determine whether (and, if so, to what extent) they can be used against this especially persistent and virulent criminal phenomenon.