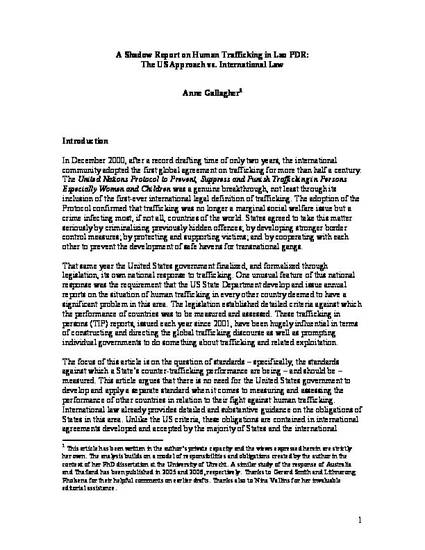 Since 2001, the United States Government has issued annual reports on the situation of human trafficking in every country other than its own identified by the State Department as having a significant trafficking problem. The focus of this article is on the standards that are used to assess the response of States to trafficking. The article examines the way in which the US judges the performance of countries while noting that international law already provides detailed and substantive guidance on the obligations of States in this area. The author demonstrates, using Lao PDR as an example, that application of these international standards yields a far better result than is possible under the US approach: one that is legally sound as well as more accurate, more nuanced and more likely to induce real and lasting change. The objective of this exercise is to confirm the importance of evaluation and assessment when it comes to a country's performance in dealing with trafficking - while at the same time emphasizing the dangers and limitations inherent in a unilateralist approach that is fundamentally limited in its ability to accurately capture the situation and is not necessarily grounded in established and accepted international rules.