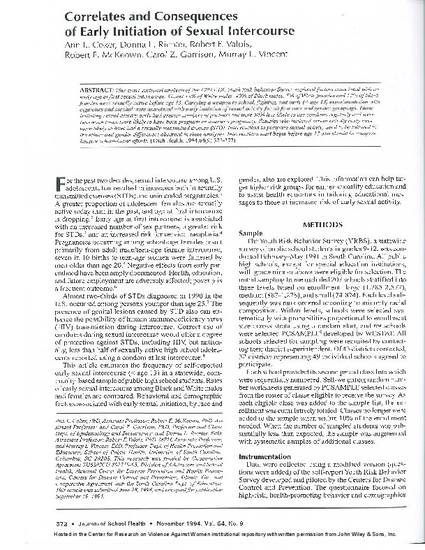 This cross-sectional analysis of the 1991 CDC Youth Risk Behavior Survey explored factors associated with an early age at first sexual intercourse. Almost 18% of White males, 49% of Black males, 5% of White females and 12% of Black females were sexually active before age 13. Carrying a weapon to school, fighting, and early (< age 13) experimentation with cigarettes and alcohol were associated with early initiation of sexual activity for all four race and gender groupings. Those initiating sexual activity early had greater numbers of partners but were 50% less likely to use condoms regularly and were two-seven times more likely to have been pregnant or caused a pregnancy. Females who initiated sexual activity early were more likely to have had a sexually transmitted disease (STD). Interventions to postpone sexual activity need to be tailored to the ethnic and gender differences observed in these analyses. Interventions must begin before age 13 and should be comprehensive school-based efforts.

Dr. Ann Coker had not been a faculty member of the University of Kentucky at the time of publication.